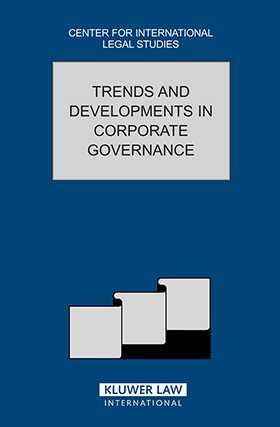 Trends And Developments In Corporate Governance

Qty.
This product is available for the standing order program. Learn More
Add to Cart
* For general delivery times, please see our Shipping Policy
Share
Overview
The 2003 Special Issue of the Comparative Law Yearbook of International Business deals with issues relating to Corporate Governance. Following a series of scandals involving reporting by public companies in the United States, there has been an increase in the number of measures dealing with, among other things, the liability of directors and managers when submitting company financial returns. The first and most well-known piece of legislation to be introduced was, of course, the United States Sarbanes-Oxley Act of 2002.

The Sarbanes-Oxley Act covers matters including the establishment of audit committees, disclosure committees, and codes of ethics, with an emphasis upon the disclosure of information and transparency. It describes, for example, the principle of ¿vicinity of Insolvency¿ and the relevant information to be disclosed to shareholders and creditors. The issue of directors¿ duties and responsibilities is addressed, together with the consequences of insider trading and conflicts of interests. The Act also contains provisions on whistleblowers and introduces new criminal sanctions for company wrongdoings, as well as enhancing those penalties already in place.

As a result of the Sarbanes-Oxley Act, many countries have followed suit and adopted their own measures to combat corporate failings, corruption, and the misuse of power. Among those covered in this publication are South Africa, China, a number of eastern and western European states, and various Asian jurisdictions. Other specific topics discussed are, inter alia, generally accepted accounting principles, insolvency, the banking, securities and insurance industries, foreign issuers, and close private companies.

Corporate Governance is an extremely topical subject which is of great importance and relevance to anyone involved in company affairs. Many corporate practitioners will, therefore, find this publication highly useful when advising clients on their various rights and responsibilities.