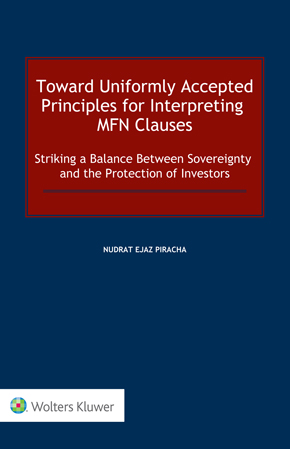 This product is available for presale.
Price

Toward Uniformly Accepted Principles for Interpreting MFN Clauses is a visionary book that provides a definitive overview of the complex ambiguities surrounding interpretation and application of most-favored-nation clauses (MFNCs). Albeit customarily, international jurisprudence and tribunals tend to safeguard the host State’s sovereignty at the expense of foreign investor protection. The author of this in-depth research elucidates that such an approach is not warranted under international law rules on the treaties’ interpretation. Based on the history of MFNCs and applicable treaty and customary international law, this novel book furnishes a set of principles that would guide international courts and tribunals when interpreting MFNCs.

This compendium of all publicly available international cases relating to MFNCs sheds light on the various legal interpretive theories that have arisen. In the process, the author’s groundbreaking insights:

The book’s substantive analysis centers on the debate about misapplication of the Vienna Convention on the Law of Treaties and other interpretive theories by tribunals. It also examines jurisdictional and critical issues involving MFNCs.

This book emphasizes the functional benefits of greater uniformity in investor-State jurisprudence and its research-based promotion of consistency and coherence and will prove invaluable to investors, State policymakers, relevant international organizations, arbitrators and other practitioners, academics, and all parties advocating reform in the investor-State dispute settlement regime.

Disclaimer: This title is in pre-production and any names, credits or associations are subject to change. The current table of contents and subject matter is for pre-release sample purposes only.