Loading...
Store International The Use of Languages in Employment Relations 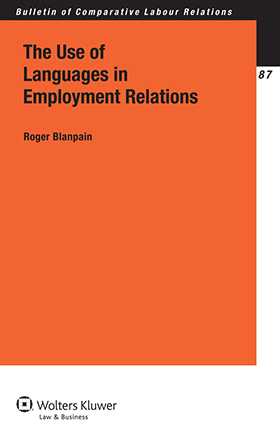 The Use of Languages in Employment Relations

In a world dominated by thousands of multinational enterprises which take worldwide and far-reaching decisions from faraway headquarters, and in which cross-border migration of workers hugely exceeds all precedent, enforcing the prohibition of discrimination on the basis of language emerges as a major challenge. Despite the policy consensus of ‘unity in diversity’ that prevails nearly everywhere today, exceptional rules continue to emerge as necessary to protect languages against economic pressure from other linguistic groups and cultures. Especially in the European Union, where freedom of movement of workers and freedom of services are explicitly guaranteed, language-related circumstances often lead to serious disputes that have not been envisioned by policymakers or legislators.

This first book of its kind focuses on this nexus between employment relations and linguistic diversity, principally in the EU but taking parallel global developments into account. The author cover such issues and topics as the following:

In-depth analysis of several crucial cases sharpen the focus and clarify central issues. As employers, employees, governments, and other social partners are increasingly confronted with an exploding multicultural society, this book will prove enormously valuable in its search for solutions which are both legally justified and feasible in practice. Labour and employment lawyers, jurists, and academics worldwide will appreciate its deeply informed clarity of perspective, its depth of treatment, and its considered recommendations.
Table of Contents

Chapter 1 The Tower of Babel

Chapter 2 Equal Treatment: No Discrimination on the Basis of Language

Chapter 4 Freedom of Services in the EU

Annex II: Directive 2014/54/EU of the European Parliament and of the Council of 16 April 2014 on Measures Facilitating the Exercise of Rights Conferred on Workers in the Context of Freedom of Movement for Workers.