Loading...
Store International The Transformation of Contract in Europe 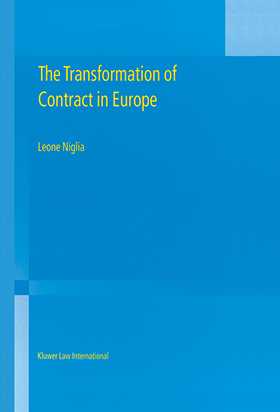 The Transformation of Contract in Europe

Qty.
Add to Cart
* For general delivery times, please see our Shipping Policy
Share
Overview
This book explores the evolution of contract law in England, France, Germany and Italy during the last one hundred years from the perspectives of law and its context.

Dr Niglia's treatment of contract law is fundamentally distinct from that in legal comparativist studies. It reassesses classical descriptive, analytical and normative positions and argues that contract law is not a legal abstraction; It is part of a more concrete story of societal developments, the reflection of each polity's legal and political order. In particular, the book uncovers an interaction between the core area of contract law, the law of standard form contracts, and the socio-economic and political history over the past century of England, France, Germany and Italy. As such, it is argued that the law has been strongly influenced by defining state 'choices' about the citizenry's welfare. The key argument is that during the course of the last decade as a result of 'Community re-regulatory' processes, a major transformation of the legal structure has been gaining ground, alas yet unnoticed in legal comparative studies.

In the first instance, the book engages those interested in contract law and its 'Europeanisation', in the law of standard form contracts, and in comparative and economico-legal aspects of contract law. However, this book will also interest the reader expert in Community law, even if unconcerned with contract law. It is a rigorous investigation into one of the 'underworlds' of which European integration is composed. It looks at certain aspects which are central to Community consumer policy, and it presents an indepth analysis of the making and enforcement of the EC Directive on Unfair Terms in Consumer Contracts.