Loading...
Store International The 'Right to Damages' under EU Competition Law. From Courage v. Crehan to the White Paper and Beyond 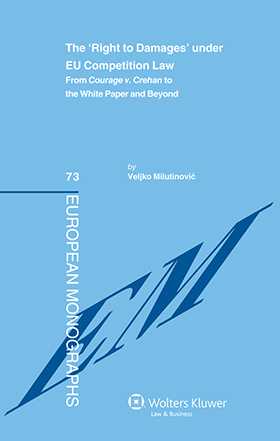 The 'Right to Damages' under EU Competition Law. From Courage v. Crehan to the White Paper and Beyond

Since the seminal judgment of the European Court of Justice in Courage v. Crehan (2001), a right to damages is available not only to individuals (i.e. companies) acting against the Member States, but also to individuals acting against each other, as a result of the direct effect of Article 101 of the Treaty on the Functioning of the EU. However, it is only since the Commission’s 2008 White Paper on Damages that a real impetus to the ‘private enforcement’ implied by this decision has taken place. If the White Paper is converted into legislation, it will have profound implications on the way both EU competition law and European (EU or national) private law functions. It is the provocative thesis of this book that the Commission’s struggle for a more ‘effective’ system of private enforcement has gone from being a mere enhancement of a single EU policy (competition) to slowly but surely fuelling a paradigm shift in EU law. In an absorbing and richly detailed analysis of this thesis, the author examines such controversial and complex issues facing private enforcement of competition law in the EU as the following:

• the binding effect of competition authority decisions on a civil proceeding;

• the pass-on defence and standing of indirect purchasers;

• distinguishing between restitution and compensation;

• containing the ‘spill-over’ effect; and

The discussion of these issues and others underscores their tendency, as the result of gradual judicial development, to make damages claims in the EU more likely to be brought, more likely to be won, and more beneficial to the plaintiff if won. The forceful implication is that these issues carry much broader implications than mere efficiency in the context of the competition rules; rather, they have a profound impact on the wider issues of access to justice and the right to a fair trial in the Union’s legal order. Through the perception of ‘private enforcement’ of EU competition law as an enduring legal and socio-political reality that is likely to remain, this book sheds new and powerful light on EU constitutional law and the ever-expanding influence of EU law on (largely national) private law. Although the practical availability of damages in national judicial fora is an issue which is still very far from being satisfactorily resolved, this far-reaching study reveals a trend that seems virtually inevitable, and will be of enormous interest to academics and policymakers concerned not only with competition law but with the very basis of EU law.

Table of Contents
Introduction. 1. Competition Law and Enforcement. 2. Commission Initiatives: From the Deringer Report to the Modernisation Regulation. 3 . The Rise of the Right to Damages. 4. Developing the Right to Damages. 5. The Concepts of Liability, Legal Basis and Fault. 6. Damage, Damages and Causation. 7. Nullity. 8. Restitution. 9. Pass-on, Indirect Purchasers and Antitrust Injury: ‘The Right Plaintiff’ under US Law. 10. The ‘Right Plaintiff’ under EU Law. 11. The ‘Binding Effect’ of Commission Decisions. 12. The Binding Effect of Decisions of National Competition Authorities. 13. Legislating the Right to Damages. 14. General Conclusions and a Possible Additional Option. Bibliography.
Volumes
Related Products