Loading...
Store International The Notion of Employer in the Era of the Fissured Workplace 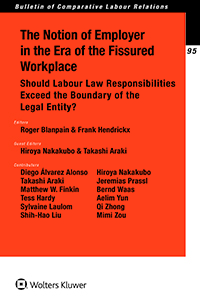 The Notion of Employer in the Era of the Fissured Workplace

The Notion of Employer in the Era of the Fissured Workplace deals with the most important labour policy issue of whether labour law responsibilities should exceed the boundary of the legal entity in the era of corporate restructuring, outsourcing, and off-shoring in globalized economy. The word ‘fissured’ aptly describes the effect on the workplace of the enormous retreat from direct employment on the part of large enterprises that began several decades ago and shows no sign of slowing down. Market-leading companies, even though they continue to wield considerable influence on the fate of actual workers, may thus be relieved of legal responsibility as employers. This has paved the way for several complex discussions: How extensive is this phenomenon? Do recourses exist in labour law? What ongoing trends can be discerned? This groundbreaking book tackles these questions and more, with thoroughly researched reports from ten of the world’s leading market-driven economies – Australia, China, France, Germany, Japan, the Republic of Korea, Spain, Taiwan, the United Kingdom, and the United States.

Recognizing that law should squarely grasp and tackle this new reality, the authors consider issues such as:

Each contributor describes, for his or her country, how far the fragmentation and externalization of employment has gone, current legislation protecting workers in a multilayered contractual relationship or indirect employment relationship (e.g., on health and safety, wages, bargaining, dismissal), and emerging developments and trends.

As all the country chapters were written following a similar organizer’s outline, the readers can easily understand how each country deals with the same issues by similar or different measures. The chapters in this book examine both the interpretative and legislative responses to the complicated, multilayered corporate structures and work arrangements and thereby ably responds to the question posed by a recent study: Why has work became so bad for so many and what can be done to improve it? Although concerned scholars worldwide will rally to the call, the reports in this volume serve to be of great practical value to business persons and labour and employment lawyers everywhere.

CHAPTER 2 Fissurization in Japan: Overview and Analysis from a Legal Perspective Qi Zhong

CHAPTER 3 Reconsidering the Notion of ‘Employer’ in the Era of the Fissured Workplace: Traversing the Legislative Landscape in Australia Tess Hardy

CHAPTER 4 Reconsidering the Notion of ‘Employer’ in the Era of the Fissured Workplace in the UK: Should Labour Law Responsibilities Exceed the Boundary of the Legal Entity? Jeremias Prassl

CHAPTER 5 Reconsidering the Notion of ‘Employer’ in the Era of the Fissured Workplace in Germany: Should Labour Law Responsibilities Exceed the Boundaries of the Legal Entity? Bernd Waas

CHAPTER 6 Reconsidering the Notion of ‘Employer’ in the Era of the Fissured Workplace: Responses to Fissuring in French Labour Law Sylvaine Laulom

CHAPTER 8 Regulating the Fissured Workplace: The Notion of the ‘Employer’ in Chinese Labour Law Mimi Zou