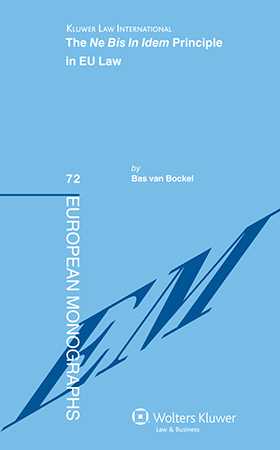 The Ne Bis in Idem Principle in EU Law

The legal principle of ne bis in idem restricts the possibility of a defendant being prosecuted repeatedly on the basis of the same offence, act, or facts. Although few would dispute its relevance to the regulation of transnational justice, there is as yet no universally accepted ne bis in idem rule or provision available at the international level, although it is to some extent recognized and respected in Europe, via Article 54 of the Convention on the Implementation of the Schengen Agreement (CISA; integrated into EU law by the Treaty of Amsterdam) and Article 4 of the 7th Protocol of the European Convention on Human Rights. The relevant case law of the ECJ and the ECtHR has implications for the systems of criminal and administrative law in European states, as well as for the interpretation and application of the principle in some areas of EU law, such as competition law. This book analyses these important implications, fulfilling a genuine need to assess the need for – and the prospects of – a ‘European’ ne bis in idem principle. The author identifies and describes obstacles that stand in the way of a single, autonomous, and uniformly applicable general ne bis in idem principle of EU law – differently worded provisions within the different ‘European’ frameworks; a measure of confusion and conflict within the case law of the Community courts; positive conflicts of jurisdiction and the allocation of cases between the Member States; and the vague exception possibilities laid down in Article 55 CISA. Among the issues examined are the following:

• the problem of defining the substance of the guarantee;

• scope of application of the guarantee;

• mechanisms for the coordination of the allocation of cases between Member State authorities and the role of Eurojust;

The author approaches the subject along two lines: first by way of conceptual analysis, and then through a jurisprudential analysis of the relevant case law of the ECJ and the ECtHR, offering well-informed, insightful recommendations and suggestions along the way. As the first contribution to an in-depth understanding of the fundamental problems and issues associated with the interpretation and application of a ‘European’ ne bis in idem principle, this study takes a giant step towards developing and refining the principle within the legal order of the EU. Jurists and legal scholars concerned with the foundations of European law will welcome the book, as will competition law practitioners and officials concerned with transnational police and judicial enforcement.