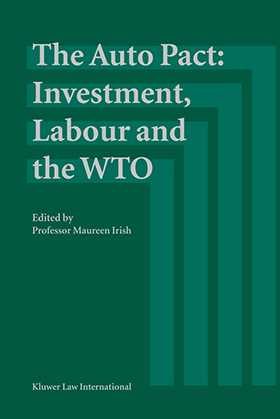 The Auto Pact: Investment, Labour and the WTO

Canada and the United States signed the Automotive Products Trade Agreement (Auto Pact) in 1965, thus resolving a competitive crisis in Canada's auto industry and extending that industry's vitality for another 35 years, until a decision of the World Trade Organization (WTO) in February 2000 determined that the Pact violated international trading rules. Following an unsuccessful appeal by Canada to the WTO's Appellate Body, the pact formally came to an end in February 2001.

For policymakers and scholars concerned with international trade, the story of the Pact presents a fascinating case in its own right. The great value of this remarkable book, however, is its elucidation of the main issue underlying the Pact and its forced ending: the relationship between international trade rules on the one hand and investment measures intended to encourage local economic activity on the other. In this connection the Canadian auto industry – centered in Windsor, Ontario, directly across the river from Detroit, the heart of the industry in the U.S.– offers an intensely concentrated sample of the triple nexus of investment, labour and trade that lies at the core of economic development worldwide.

Sixteen expert authors, both practitioners and academics, here open perspectives on this nexus that are of profound significance for the future of international trade. These encompass such matters as the following:

• the vulnerabilities of a local community dependent on trade and open borders;

• labour union tensions engendered by trade rule 'levelling' that takes little or no account of national or local economic realities;

• implications for developing countries of the WTO finding that a production-to-sales ratio is a prohibited export subsidy;

• the impact of Mexico's role under NAFTA on the Canadian auto industry; national and local regulation of government subsidies intended to attract investment;

• ongoing multinational efforts to create a multilateral regime to protect and regulate foreign direct investment; and

• the persistent failure of the WTO to reach a consensus on labour standards despite the clear provisions of major international law instruments.

All these issues and more are brought into sharp focus by the history of the Auto Pact and the implications of its demise. For this reason, this collection of insightful essays will be of incomparable value to professionals in every area of international trade.

The Auto Pact: Investment, Labour and the WTO was produced with the support of the Canadian-American Research Centre for Law and Policy at the Faculty of Law, University of Windsor.