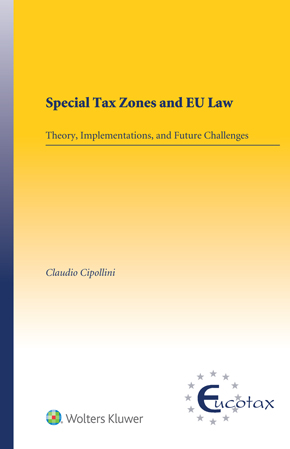 About this book:
Special Tax Zones and EU Law provides a general legal theory for special tax zones (STZs) and insights on the substantial and procedural aspects in the implementation of the new model of the Social Cohesion Zone in the context of the European Union (EU) cohesion policy. Economic recovery from the global financial crisis of 2007–2008 has been sketchy, with some areas within the EU still trapped in seemingly irremediable industrial stagnation and job loss. EU institutions are called upon to provide concrete amelioration for these situations, through the design and implementation of effective tax policies in accordance with the fundamental principles of EU law. In this original, innovative book, the author presents a new and expanded view of how STZs – areas of land where territorial advantages are granted on direct and/or indirect taxation – can deliver growth and mitigate economic and social emergency.

What’s in this book:
Recognizing that, although a number of STZs within the EU have been established, there is still no systematic framework for them in the EU legal system, the author works out a comprehensive theory for STZs in the field of European tax law, dealing incisively with the interface of STZs with such essential legal and tax aspects as the following:

Furthermore, the author develops a new model of STZs for the most disadvantaged areas of the EU – the so-called Social Cohesion Zone – to respond decisively to issues of compatibility with such critical variables of EU law as those dealing with the outer limits set by State-aid rules and fundamental freedoms, clearly demonstrating the model’s practical viability. Detailed reviews of Member States’ practice in existing STZs and their tax regimes are thoroughly described so different variables can be compared.

How this will help you:
As a comprehensive description of the state of knowledge about STZs, including the relevant background and their current place in EU law, this book has neither precedents nor peers. It allows practitioners, policymakers, and academics in tax law to understand completely the relationship between EU law and national legislation in the context of STZs, focusing on the possibility of reconciling the tax sovereignty of the Member States with a supporting and coordinating role of the EU institutions. It will be warmly welcomed by the tax law community.

CHAPTER 2
The Legal Dimension of STZs

CHAPTER 4
STZs in the Member States

CHAPTER 6
Towards a New Model for Social Cohesion Policies