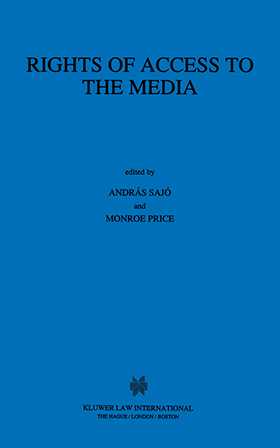 Qty.
Add to Cart
* For general delivery times, please see our Shipping Policy
Share
Overview
As broadcasting systems transform – both in societies marking a post-communist transition and in the rest of Europe and the United States – opportunities for `access' are frequently put forward and debated. Just as frequently, little is done to analyze what is meant by access and how the concept fits into a theoretical framework. This volume of essays has its origins in a conference held in June 1993 at the Institute for Constitutional and Legislative Policy at the Central European University in Budapest. The purpose of the conference was to gather scholars with a commitment to exploring the theoretical and actual implications of various access regimes as they have been or were then being practised or proposed. The conference offered an opportunity to review the political context in which access was being considered at a raw and early moment in the transitions to democracy. Problems of hate speech and lustration – a negative form of access, namely, access by society to information about the personal past of public figures – compounded the difficulty of policy-making. Access issues yielded concerns about privatization since the ownership of instruments of the press are a key factor in access and that implicated the choice of licensees, the conditions under which they should operate, whether and to what extent foreign investment should be allowed. The inevitable, underlying problem concerns the role of the state in establishing rules, maintaining a hand in establishing the narratives of continuity and, indeed, in letting go and fostering the processes of change. The responses are organized in four sections: theories of media access; access to media in Europe and the United States; judicial review of access to the media; and the media and the political arena. The contributions do not fit neatly within these categories, and, as a result, some discussion of almost all the issues will be found in each paper.
Volumes
Related Products