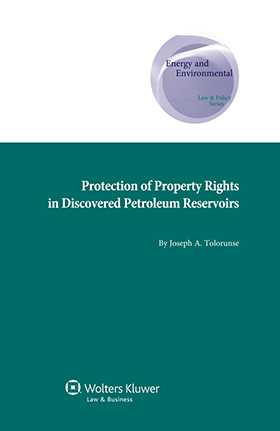 By Joseph A. Tolorunse
Format
Hardbound

Despite compulsory unitisation provisions in many national petroleum laws, unilateral capture of oil and gas – which leads to oil allocation problems between two adjoining licensees that have a common petroleum reservoir – continues to occur worldwide. Neither legislation nor judge-made law has succeeded in preventing it or eliminating its negative effects. Indeed, attempts by regulators to enforce retroactive unitisation are often met with stiff opposition and even court action. In effect, there is no protection or secured property right to underground petroleum resources: the so-called ‘rule of capture’ rewards those who diligently exploit others’ petroleum. Given today’s massive technological innovation, continued adherence to this outmoded practice flies in the face of investors’ rights and the broader field of human rights.

Addressing comprehensively the persistence of the rule of capture in light of new technologies such as horizontal or directional well drilling and hydraulic fracturing, this first book of its kind sets forth the necessary theoretical framework to determine whether an investor or licensee has property rights to a discovered petroleum reservoir and is thus entitled to protection under investment treaties and international human rights instruments. Although the issues covered are global, the author focuses on oil and gas law and jurisprudence in six key jurisdictions: the United States, the United Kingdom, Canada, Australia, Nigeria, and the Netherlands. Issues and topics covered include the following:

Employing law as the main analytical tool, the book also draws on geology, reservoir engineering, and economic theories of property. The author develops a viable framework of protectable property rights in discovered petroleum reservoirs that will prevent unilateral capture and serve not only the public interest but also protect the interests of the licensees. He identifies the best standards and guidelines of the selected countries, and gives lawmakers, practitioners, and oil and gas executives a way to reconcile the interests of both the licensees and the State, to restore confidence and stimulate investments, and to enhance the security of a licensee’s title.

Chapter 5 The Regime of Unilateral Capture I – Accession Jurisdiction