Loading...
We know your business is rapidly adapting to the global COVID-19 outbreak. If you need assistance with your Wolters Kluwer products or would like to get more information on a complimentary Guest Pass to any of our online products, please contact your representative. To help you stay informed and navigate the changes, Wolters Kluwer is providing free insights and resources. View Resources here >> Close
Store International NAFTA and NAALC: Twenty-Five Years of North American Trade - Labour Linkage, Second edition 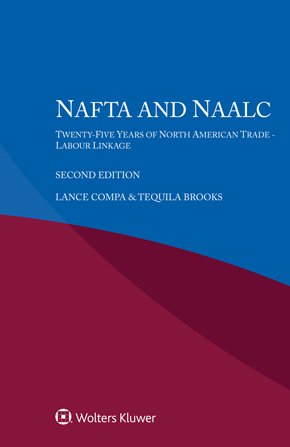 The 25th anniversary edition of the NAFTA and NAALC monograph in the International Encyclopaedia of Laws, Labour Law and Industrial Relations is a comprehensive and up-to-date 270-page resource that contains essential background on the structure and operation of labour provisions in North American free trade agreements, including NAFTA, USMCA, CAFTA-DR, TPP, CPTPP, TTIP, CETA, EU-Mexico, and Canadian and US bilateral free trade agreements with partners in Latin America and around the world. It also contains a complete digest of all of the citizen petitions filed under the NAFTA labour side agreement since 1994. The monograph includes early petitions filed about trade union rights at the Honeywell and Echlin plants in Mexico, the McDonald's case in Canada, and the Washington Apple and DeCoster Egg cases in the United States – not to mention recent petitions filed about migrant worker rights under the H-2A and H-2B visa programs in the US.

In addition to being the most complete compilation of NAALC cases in existence today, NAFTA and the NAALC Twenty-Five Years of North American Trade-Labour Linkage outlines the internal mechanics leading to the filing of a 2000 NAALC petition with the Government of Mexico about unequal treatment of migrant workers in the US, and describes changes in the treatment of petitions by US, Mexican and Canadian authorities over the last 25 years. It also contains a chapter that compares the NAALC to the OECD Guidelines for Multi-National Enterprises and highlights recent North American cases filed under the OECD Guidelines including the relatively lesser known 2004 Yucatan Markey Tex-Coco Tex petition, which was dual filed under both mechanisms, and dual petitions filed under NAALC and the OECD Guidelines about working conditions at Chedraui grocery stores in Southern California and Northern Mexico.

Highlights in 25th anniversary edition include:

The Authors
List of Abbreviations
Renegotiating NAFTA: the Second Half of the Obama Era and the Beginning of the Trump Administration (2014–2018)
Chapter 1. Background
Chapter 2. Historical Highlights
Chapter 3. Norms, Institutions, and Operations of the NAALC
Chapter 4. NAALC Submissions and Cases
Chapter 5. The NAALC and ILO Standards
Chapter 6. Evaluating the NAALC
Chapter 7. Continuing Controversy over NAFTA and the NAALC
Chapter 8. The NAALC and International Labor Solidarity
Chapter 9. The OECD Guidelines: An Alternative to NAALC and the Labor Provisions of Free Trade Agreements
Chapter 10. Labor Provisions of Post-NAFTA Free Trade Agreements in North America
Chapter 11. The Renegotiation of NAFTA and Negotiation of the Proposed USMCA
Selected Bibliography
Index