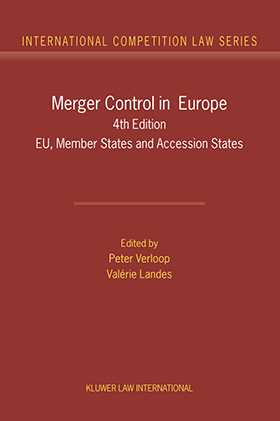 Qty.
This product is available for the standing order program. Learn More
Add to Cart
* For general delivery times, please see our Shipping Policy
Share
Overview
Merger control in Europe has continued to evolve rapidly. In addition to significant changes in the national merger control regimes in Denmark, France, Germany, the United Kingdom, and Portugal, a new EU Merger Regulation is expected to enter into force on 1 May 2004, a measure that will launch the most far-reaching reform of European merger control since the adoption of the EC Merger Regulation in December 1989. This updated edition of the preeminent work in the field offers practitioners expert guidance through the next phase of this crucial aspect of business and economic activity in Europe.

Like earlier editions, this new edition of Merger Control in Europe introduces practitioners and interested academics to the issues of merger control which are relevant when preparing an acquisition within the European Union. In order to provide insight into problem areas at each national level, and to allow possible comparisons, it includes a chapter on each of the 14 EU countries with a merger control regime, as well as one on the EU itself. In addition, as a first step towards the expected enlargement of the European Union in 2004, this new edition welcomes contributions on Hungary, Poland, the Czech Republic, and Cyprus.

For each jurisdiction, the major elements of merger control law, the definition of concentration, control or notification thresholds, procedure, and substantive test clearance or appraisal, as well as other issues unique to each country, are all covered in some detail. For any of the jurisdictions, the practitioner will quickly be able to determine the precise scope of such important considerations as the following: