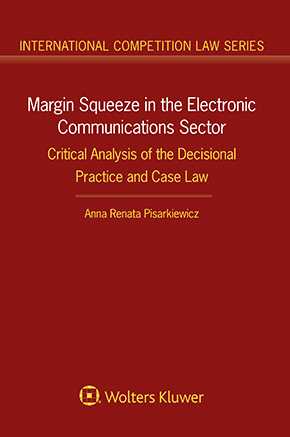 Margin Squeeze in the Electronic Communications Sector: Critical Analysis of the Decisional Practice and Case Law

Margin Squeeze in the Electronic Communications Sector provides an in-depth analysis of margin squeeze allegations in the electronic communications sector. Margin squeeze is a form of abuse of a dominant position in which a vertically integrated company reduces the margin between the price charged to competitors and the price charged to consumers, which can have the effect of excluding a competitor from the market. In the decade or so since the liberalisation of network industries, margin squeeze has become a major source of concern among competition authorities and courts, particularly pronounced in the electronic communications sector. Because some of the adopted decisions show significant inconsistencies in approach, and legal certainty remains elusive in this area, this book which provides an advanced and comprehensive analysis of principles guides the ex post assessment of margin squeeze.

What’s in this book:
Issues and topics covered include:

This book also includes a critical comparison of the vertical foreclosure analysis undertaken in margin squeeze cases with the approach adopted in the EU Non-Horizontal Merger Guidelines. Throughout the analysis, margin squeeze treatment in the European Union and its Member States is examined in light of the diverging approach adopted by the US Supreme Court.

How this will help you:
The increasing complexity of the electronic communications market can only further confound an already complex assessment of price squeezes, and one can expect that claims of anticompetitive margin squeeze in liberalised network industries will continue to be high on the enforcement agenda of competition authorities for years to come. In light of the need for a coherent, or at least predictable, sentencing policy to provide relative legal certainty, the research in this book proves invaluable. The analysis and conclusions discussed in this book will be welcomed by policymakers, regulators, and lawyers working in the areas of competition law and electronic communications law.

CHAPTER 2
Taxonomy of a Margin Squeeze and Its Enforcement Models

CHAPTER 3
The Scope of Intervention in Margin Squeeze Cases: Substantive and Institutional Considerations

CHAPTER 4
Theory of Competition Law as a Tool of Regulation in Network Industries: Conceptual Issues

CHAPTER 5
Margin Squeeze as a Constructive Refusal to Deal: A Deviation from the Essential Facilities Doctrine or Just Another Form of Vertical Foreclosure?

CHAPTER 7
Conclusions: Re-evalution of the Added Value of Margin Squeeze as an Independent Theory of Abuse