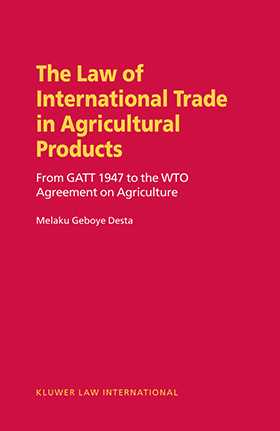 Law of International Trade in Agricultural Products, From GATT 1947 to the WTO Agreement on Agriculture

Qty.
Add to Cart
* For general delivery times, please see our Shipping Policy
Share
Overview
As far back as Ricardo's principle of comparative advantage--from which all trade liberalisation theory ultimately derives--it has been customary to treat agriculture as the general exception to trade rules.

To this day, nations protect their agricultural trade in a variety of ways: through the limited quantitative restrictions and export quotas permitted under prevailing trade rules, through country-specific derogation in the form of waivers, or even through blatant violations of the General Agreement on Tariffs and Trade (GATT).

In fact, despite the general dramatic decline in tariffs in recent decades, the level of effective protection against the flow of agricultural trade has been steadily rising, almost entirely at the behest of developed countries and to the detriment of developing countries.

This book analyses the current realities and future prospects for global trade in agricultural products. It seeks to explain the real or apparent rationale behind the virtual exemption of agricultural trade from the operation of the law governing international trade in general, focusing on the GATT/WTO system but examining a variety of nation-source policy reasons that generate this crucial counter-current to the general sweep of trade liberalisation.

The issues and topics that arise in the course of the discussion include: