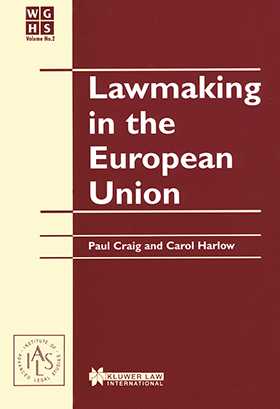 Law Making in the European Union

Qty.
This product is available for the standing order program. Learn More
Add to Cart
* For general delivery times, please see our Shipping Policy
Share
Overview
The law-making process of the European Union is a topic of primary concern not only for academics from a variety of disciplines, but also for politicians and for citizens of the EU in general. Law Making in the European Union covers every aspect of this subject in a unique and comprehensive manner.

Part I of the book considers issues relating to democracy and legitimacy within the Union, topics which have been the subject of increased debate in recent years. Part II explores the role of Parliaments in the law-making process, including both that of the European Parliament and of national parliaments.

The focus shifts in Part III to institutional interaction. The contributions within this section highlight the way in which law making operates in the diverse subject areas which fall within the competence of the Community and the Union, emphasising the way in which the major players interact when passing new legislation.

Finally, Part IV considers problems relating to the harmonisation, implementation and incorporation of Community law within the Member States. The fact that the contributors represent a number of different Member States provides a valuable wider focus for the inquiry.

The WG Hart Legal Workshop is organised under the auspices of the Institute of Advanced Legal Studies of the University of London.