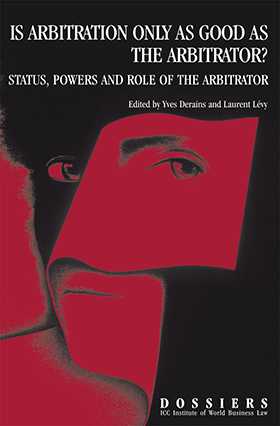 “An arbitration is only as good as the arbitrator”. This frequently used maxim acts as an invitation to use arbitration but also as a scarecrow warning users off arbitration.

Disputing parties are of course free to choose their arbitration tribunal, which allows them to begin an arbitration with a certain tranquillity. Once the arbitration has begun, should the parties become concerned if the arbitrators’ qualities do not meet their expectations? Unlike court judgments, arbitral awards are not subject to ordinary judicial remedies. Thus, a disastrous award may well remain disastrous for a party with no remedy available to right certain wrongs.

There are proven methods for the parties to detach at least part of “their” arbitration from the arbitrators. They may impose certain constraints on their intended arbitrators, be it in the agreement they conclude with the arbitrators or through the operation of the legal, customary, ethical or statutory rules that regulate the arbitrators’ activities, in what has now become a true profession. The parties may also consider having an institution oversee their arbitration, which will bring an additional measure of control over the exercise of the arbitrators’ ‘mission’. Finally, the picture would be incomplete without a discussion of the role played by certain substantive rules, such as the duty of confidentiality.

The contributions in this Dossier VIII, Is Arbitration only As Good as the Arbitrator? Status, Powers and Role of the Arbitrator, tackle these complex issues from different vantage points, bringing to bear the knowledge and experience of some of today’s leading experts in the field of arbitration.

The contributors to this Dossier include:

The ICC Institute of World Business Law brings together the finest legal minds to strengthen links between international business practitioners and the legal profession. The Institute’s ‘Dossiers’ is a series that has gained international prestige. These Dossiers are the outcome of the Institute’s annual meetings, where experts from around the globe come together to discuss salient issues of international commercial law and arbitration.

The Four Musketeers Of Arbitral Duty: Neither One-For-All Nor All-For-One. Pierre Mayer

The Laws OR Rules Of Law Applicable To The Merits Of A Dispute And The Freedom Of The Arbitrator Kevin K.Kim

The Arbitrator And The Litigants (Some Exceptional Clashes) V.V. Veeder

ICC At A Glance