Loading...
Store International How Fixed is a Permanent Establishment? 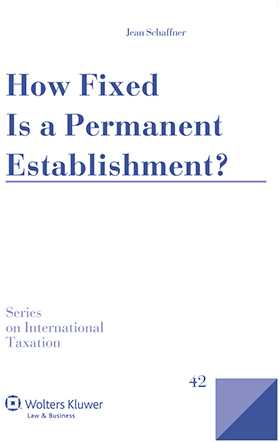 How Fixed is a Permanent Establishment?

Drawing on case law, administrative practice, and business decisions in numerous jurisdictions, the author discusses the permanent establishment criteria under conditions of e-commerce and the service economy. He shows that the OECD Model Convention and its commentaries already offer the basis for the evolution of the analysis of the concept, and that the preservation of permanent establishment protects and maintains the level playing field between capital importing and capital exporting economies. He examines in depth such elements as the following:

Taking into account important distinctions between two model conventions (OECD and UN), as well as pertinent EU directives and the impact of EU law, the author proposes minor amendments to the OECD Model that adapt it to economic reality and current trends in jurisprudence and that can be implemented immediately. An appendix includes Article 5 and its commentaries as they have evolved since 1963, with the successive addenda and deletions.

The author’s 20-plus years of experience as a tax lawyer lend the presentation a thoroughly practical aspect. The work addresses in more detail than any other publication the topic of profit allocation to a permanent establishment in the e-commerce world, an issue which is evolving rapidly in the current economic environment.

Chapter 1. The Roots of International Tax Law and the Permanent Establishment Concept.

Chapter 3. Recent Developments of the Concept of Permanent Establishment.

Chapter 4. The Geographical Location and the Basic Definition: The Physical Permanent Establishment.

Chapter 8. Conclusion on the Territorial Location.

Appendix: Proposed Changes to the Commentaries of Article 5.