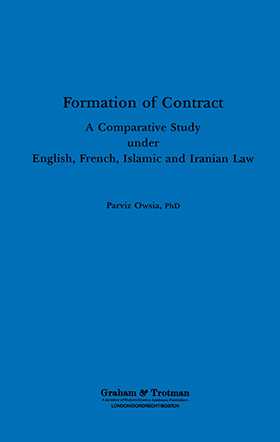 Qty.
Add to Cart
For general delivery times, please see our Shipping Policy
Share
Overview
This major reference work compares the formation of contract in the legal systems of England, France, Iran and other Islamic systems. The Preliminary Part gives a historical sketch and describes the sources of law of the four legal systems. It then describes the development and general theory of contract law in the four systems. Part One then analyses in detail the basic notions of formation of contract including the range of psychological elements and their means of expression. The author then goes on to describe and compare the function and determination of offer and acceptance in the four legal systems. Part Two analyses the mechanism of formation and import of a contract in respect of both offer and acceptance. The book has been extensively researched and includes references to Roman law and other modern legal systems. The work has been meticulously indexed and cross-referenced.
Table of Contents