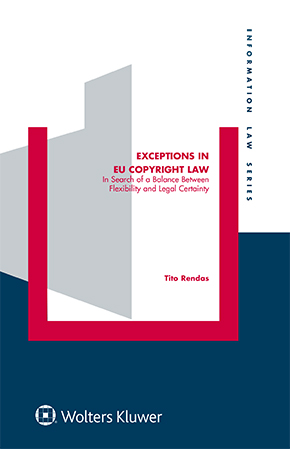 Exceptions in EU Copyright Law: In Search of a Balance Between Flexibility and Legal Certainty

Exceptions in EU Copyright Law deals with comprehensive redesigning of Article 5 of the Information Society Directive (InfoSoc Directive). In a copyright system characterised by broad and long-lasting exclusive rights, exceptions provide a vital counterweight, especially in times of rampant technological change. The EU’s controversial InfoSoc Directive – now two decades old – lists exceptions in which an unauthorised user will not have infringed the rightholder’s copyright, and there have been calls for reform in order to achieve a better balance between flexibility and legal certainty. The question to reform or not to reform this legal framework has been considered in great depth in this book, providing detailed theoretical and normative analysis of the Directive, the national and CJEU case law arising from it, and meticulously thought-out proposals for change.

The author thoroughly examines such core aspects of the framework as the following:

In an invaluable concluding chapter, the author puts forward a set of reform proposals, articulating their advantages and responding to potential objections. In doing so, the chapter also identifies, synthesises and critically examines the various proposals that have been advanced in the academic literature.

In its decisive contribution to the debate around the InfoSoc Directive and the rules that guide its implementation, interpretation, and application, this book isolates the contentious structural features of the framework and examines them in a critical fashion. There is no directly competing work that offers the analysis and proposals for reform. This topical, well-researched book will be welcomed by practitioners in intellectual property law and other areas of economic law, as well as by interested policymakers and scholars.

Chapter 5
A Road Map for Reform