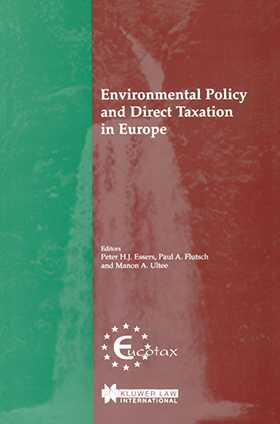 Qty.
Add to Cart
For general delivery times, please see our Shipping Policy
Share
Overview
This work examines the extent to which income taxation is influenced by the issue of environmental protection in EU Member States. Reports from seven countries belonging to the EUCOTAX (European Universities Cooperating on Taxes) network – Belgium, France, Germany, Italy, The Netherlands, Spain and the United Kingdom – investigate the relationship between environmental policy and direct taxation. The analysis covers two broad issues: the measure incorporated into personal and corporate income tax regimes to stimulate environmental protection, and the treatment of fiscal liabilities with respect to environmental legislation. The work is part of a project supported by the European Commission and the London Institute for Public Policy Research, aimed at stimulating debate about environmental tax reform in Europe. The project was coordinated by Professor Tulio Rosembuj of the University of Barcelona and Professor Peter Essers of Tilburg University, The Netherlands.
Volumes
Related Products