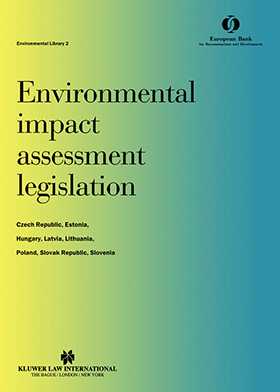 By European Bank For Reconstruction and Development
Format
Hardbound

Qty.
Add to Cart
* For general delivery times, please see our Shipping Policy
Share
Overview
The countries of central and eastern Europe face considerable challenges in their quest to protect both the health and amenity of their populations and their natural resource base; they are facing the need to clean up the legacy of pollution which they have inherited from former regimes, and ensure that the environmental consequences of present day decisions are well understood. Environmental impact assessment is a process which provides decision makers with an indication of the likely environmental consequences of their actions and can play a more proactive role in encouraging the consideration of less damaging alternatives or modifications. With legislation on EIA recently enacted or planned in all the countries addressed here, this book presents work commissioned by the European Bank for Reconstruction and Development to assist investors and regulators in the countries of central and eastern Europe and has been fully updated and reviewed for publication. Each chapter describes the EIA process in one country, and includes translations of the relevant legislation. Although the process varies from country to country, the basic structure is the same, and follows that previously developed in western countries, particularly in western Europe. Each of the eight countries is treated in the same fashion. This important new work constitutes the second volume in the European Bank for Reconstruction and Development's own Environmental Library .
Table of Contents

1. Introduction: background information about the country and its environmental policy. 2. The legislative and institutional framework of EIA. 3. The EIA process, presented in sequential order. 4. Monitoring of a project after implementation. 5. EIA in practice. 6. Possible changes in the near future. 7. Contacts for further information. 8. Copies of EIA legislation in translation.