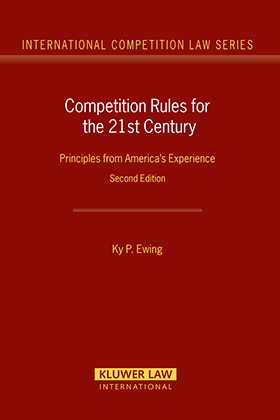 Ky Ewing’s magisterial work on international competition law is here updated to take stock of the prodigious expansion of anti-cartel enforcement throughout the world in the intervening years.

Although the book has been highly regarded as a major reconsideration of the foundations of competition law and policy, it has also proven enormously valuable for its wealth of information and practical guidance. Among its most useful features (some new to the second edition) are the following:

• a vast amount of statistical and other information about public competition law enforcement agencies and their resources around the world;

• in-depth analysis of the differences in competition law regimes and the various economic and legal theories from which they derive;

• detailed attention to jurisprudence and legal commentary over many decades;

• probing of the meaning of ‘low’ and ‘fair’ as applied to prices;

• suggestions for carrying out re-evaluation of policies on the basis of empirical evidence;

Nine new appendices have been added to this edition, covering such informative material as new statistical data about U.S. enforcement, details on the dramatic cooperation now taking place among nations in anti-cartel enforcement, and suggestions on how companies and practitioners should respond to multinational investigations.