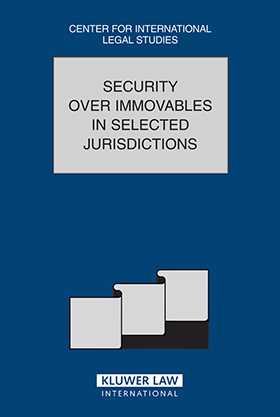 Qty.
This product is available for the standing order program. Learn More
Add to Cart
For general delivery times, please see our Shipping Policy
Share
Overview
The 2005 Special Issue of the Comparative Law Yearbook of International Business addresses issues relating to security in immovables. Each Chapter contains an overview of the security in immovables laws of a particular country. The laws vary widely among the countries; the word immovable (or real property in Common Law jurisdictions) even has different definitions in different countries.

Crossborder transactions involving immovables are integral to international business dealings. This publication provides a general overview of the methods by which immovables are secured in various countries, and each chapter contains details such as the priority granted creditors and openness of the land registers. Each chapter contains a country-specific explanation of the method by which one obtains a mortgage, lien or similar security and an exploration of the possible problems that might arise during Such a process. In addition, special attention is given to the obstacles facing non-nationals interested in buying immovables. The book evidences the varied attitudes at governments towards the purchase of immovables by non-nationals. In some countries, such as The Philippines, non-nationals are prohibited from buying land. Other countries, such as the Slovak Republic, allow foreign acquisition of nearly any immovable, only forbidding purchase of items that no private citizen can own, such as the country's rivers.

This publication reflects recent developments in security in immovables, especially in Eastern Europe. The chapter on immovables in Ukraine is based on the country's new property laws, passed in 2004. The chapters on the Czech Republic, the Slovak Republic and Hungary all reflect the changes brought by accession to the European Union,

The acquisition of property in a foreign country is an integral facet of international business and practitioners will find this publication¿s in-depth instructions for the purchase of security in immovables useful as it pertains to individual countries. In addition to showing practitioners how transactions work for individual countries, readers will be able to compare diverse legal regimes to find the one most favorable for their particular business transactions.