Loading...
We know your business is rapidly adapting to the global COVID-19 outbreak. If you need assistance with your Wolters Kluwer products or would like to get more information on a complimentary Guest Pass to any of our online products, please contact your representative. To help you stay informed and navigate the changes, Wolters Kluwer is providing free insights and resources. View Resources here >> Close
Store International Comparative Law in the 21st Century 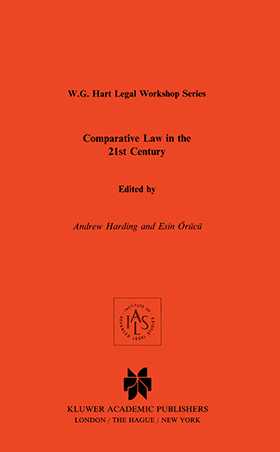 Comparative Law in the 21st Century

Available: Ships in 3-5 Business Days
Price
$200.00
Qty.
Add to Cart
Share
Overview
As society becomes more global and multicultural, many lawyers find themselves researching and applying principles and rules from several legal traditions. In Europe especially, the gradual convergence of civil law and common law that has been under way for decades is now gaining depth and breadth from aspects of Islamic, Asian, and African legal cultures, and we are all the better for it.

So it is time to take stock of where the discipline of comparative law stands and where it is going, a task ably undertaken in the sixteen insightful essays in this book. The originals of these papers were delivered at the 2000 W.G. Hart Legal Workshop at the Institute of Legal Studies of the University of London. They may be read here as not merely comparative law studies, but penetrating theses about what comparative law is actually about, or what it is for.

The general discussion tends to fall into three major areas: