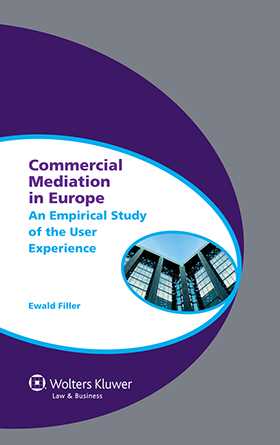 Commercial Mediation in Europe. An Empirical Study of the User Experience

For many businesses, mediation is seen as a swifter and cost-effective alternative to conventional forms of dispute resolution. Although its acceptance by policymakers in Europe has been slow, the recent development by various EU Member States of legal and institutional frameworks for commercial mediation have been complemented by a European framework for cross-border civil and commercial mediation, the EU Directive on Certain Aspects of Mediation in Civil and Commercial Matters.

This extraordinary book, the first thorough analysis of the current state of commercial mediation practice in Europe, is based on face-to-face interviews and responses to questionnaires involving the participation of 25 renowned European mediators, with complementary contributions by 20 business people who have used mediation extensively. Among the areas of interest that arise are the following:

Participants have been chosen from Austria, Germany, France, England, Scotland, Denmark, Norway, Sweden and Finland, with the aim of including all the dominant European legal traditions. There are numerous case studies, including the role of mediation in such major projects as the Vienna Airport, the Eurotunnel, and the Øresund link bridge.

The book contributes to the further professionalism of ADR in Europe by providing accurate information on the functionality of the process and its attainable results. In addition to describing the professional performance of European mediators working in the world of business, the author’s analysis crystallizes the processes, models, and strategies that characterize the practice of commercial mediation in Europe.

Guide to this Book.

Chapter 2 Findings of the Pre-Evaluation.

"The information gathered in the book represents and in-depth insight of the respective mediators and the representatives of business enterprises."

"Overall the book contributes to further professionalism of ADR in Europe as constant examples regarding the use of mediation in Europe are brought up. The book is specially designated for practicing mediators, lawmakers and other decision makers."

"This book analyzes the procedures, models and strategies used in commercial mediation. It is a very helpful guide for lawyers and their potential clients, mediators, legislators, and other involved institutions, wishing to base their actions on reliable scientific and empirical evidence. "