Loading...
We know your business is rapidly adapting to the global COVID-19 outbreak. If you need assistance with your Wolters Kluwer products or would like to get more information on a complimentary Guest Pass to any of our online products, please contact your representative. To help you stay informed and navigate the changes, Wolters Kluwer is providing free insights and resources. View Resources here >> Close
Store International CFC Legislation, Tax Treaties and EC Law 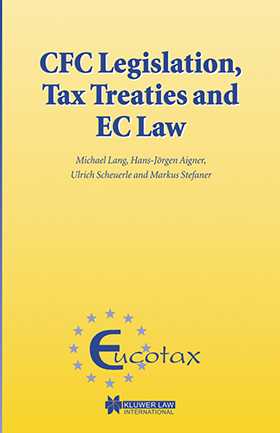 Available: Ships in 3-5 Business Days
Price
$360.00
Qty.
This product is available for the standing order program. Learn More
Add to Cart
Share
Overview
CFC legislations are common to most OECD Member States. They are introduced to combat tax evasion by shifting profits to corporations situated in low tax jurisdictions. Without the introduction of CFC legislations, residents are free to set up corporations abroad to lower their tax burden. The reason is the shielding effect of non-resident corporations. Thus, especially high tax countries feel the need to deny the tax benefits of Controlled Foreign Corporations in low tax countries. 70 experts, including the National and General Reporters, convened for a joint conference on CFC legislations in Rust (Austria) from 3 ¿ 6 July 2003. 23 National Reports from nearly all EU countries as well as Australia, the Czech Republic, Estonia, Hungary, Israel, Lithuania, New Zealand and Norway deal with domestic CFC provisions and the influence of DTCs and EC law on CFC legislations. These National Reports and a summarizing General Report have been compiled and published in this volume.
Volumes
Related Products