Loading...
Store International Banks in Distress Lessons from American Experiences of the '80s 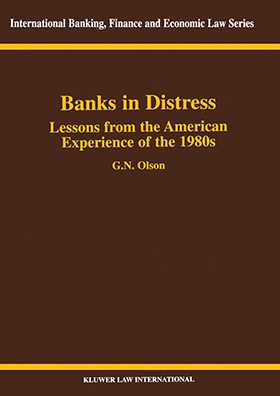 Banks in Distress Lessons from American Experiences of the '80s

Qty.
This product is available for the standing order program. Learn More
Add to Cart
For general delivery times, please see our Shipping Policy
Share
Overview
The close of the 20th century saw a remarkably high incidence of bank distress and insolvency. This book seeks to identify the causes of this ongoing financial crisis and to draw lessons for the future, with the aim of assisting developed, transition and emerging economies alike to better cope with future crises.

Banks in Distress takes as its focus the major financial system crisis experienced by the US in the 1980s, reviewing the evolution of the US banking system and the legislative, regulatory, and monetary policies of the 1980s which set the stage for the crises that followed.

The author argues that the financial difficulties in the US, and to some extent the rest of the world, were largely precipitated and exacerbated by government intervention into the American domestic economy through uncoordinated monetary and fiscal policy, as well as the uncoordinated enactment of regulatory, supervisory and enforcement legislation and policy.

The book in particular examines the importance of asset valuation, asset value inflation and deflation, and capital adequacy for banking and financial services organizations, an understanding of which is crucial to the development of a coherent regulatory framework.

The author considers what can be learned from the US experience and suggests the need for significant changes in the banking law and policy of most developed and emerging economies, arguing that a stable and workable financial system requires transparent, coordinated and proactive governmental policies in the banking, fiscal, monetary and national economic areas.