Loading...
Store International A Global Law of Jurisdiction and Judgement: Lessons from Hague 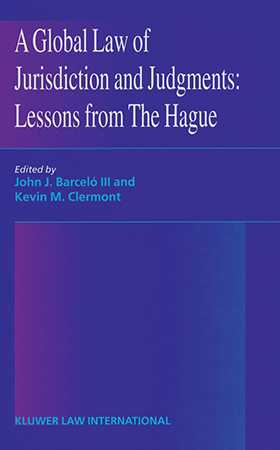 A Global Law of Jurisdiction and Judgement: Lessons from Hague

Qty.
Add to Cart
For general delivery times, please see our Shipping Policy
Share
Overview
The papers in this volume address the provisions of the 1999 Hague Jurisdiction and Judgments Draft Convention and the state of the negotiations as of the summer of 2000. They were presented at the symposium "A Global Law of Jurisdiction and Judgments: Lessons from The Hague," held in July 2000 at the Centre Panthéon (University of Paris I Law Faculty) as a part of the Cornell-Paris I Summer Institute of International and Comparative Law.

Part I focuses on the jurisdiction provisions of the 1999 Draft Convention. For the most part, the papers in Part II look to the future, though they also deal briefly with the judgments provisions of the 1999 Draft. One paper takes up changes in European Union law that will significantly affect future negotiations concerning the Draft Convention. The other two offer analyses of the major hurdles blocking the way to a successful convention and proposals for vaulting those hurdles.

The papers analyze the jurisdiction provisions of the 1999 Hague Jurisdiction and Judgments Draft Convention and shed light on many of the basic difficulties that must be resolved if a global law of jurisdiction is to be achieved.

As work on The Hague Jurisdiction and Judgments Convention continues, these papers will serve as a major reference point forming a part of the historical background and commentary on what may become before long a global law of jurisdiction and judgments.