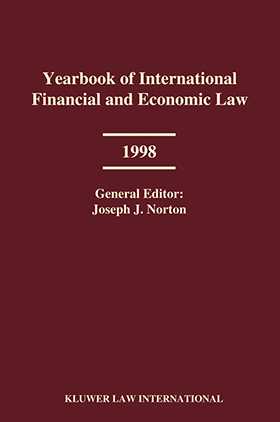 Qty.
This product is available for the standing order program. Learn More
Add to Cart
* For general delivery times, please see our Shipping Policy
Share
Overview
The third volume of this yearbook provides articles, comments, and analyses of developments throughout the previous year. A special focus section highlights the most significant legal issues raised by the formation of a single currency in the ongoing process of economic and monetary union in the European Union.

Authors of major articles in this edition include Thomas Baxter of the New York Federal Reserve Bank, Professor Richard Dale of the University of Southampton, John Berchild of Sheppard, Mullin, Richter & Hampton (Los Angeles), and Professor Marc Steinberg of SMU School of Law.

Commentary is provided on subjects including international financial standards and the transition economies, legal and practical aspects of recovering debt from Russian financial institutions, New Zealand's alternative approach to banking supervision, and regulation of foreign bank access in China.

Recent developments, as with previous editions, cover all major areas of the world. This year includes analysis of China's new securities law, the development of the Financial Supervisory Authority in the UK, regional integration and trade liberalisation in southern Africa, and problems created by government intervention in the Hong Kong stock market.

This volume will appeal to anyone with an interest in international financial and economic law throughout the world, a subject to which this volume, as with its predecessors, makes a significant contribution.