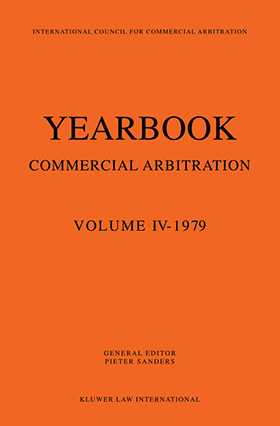 • excerpts of 8 arbitral awards made under the auspices of the International Centre for the Settlement of Investment Disputes (ICSID), the International Chamber of Commerce (ICC), the Japan Commercial Arbitration Association, the Netherlands Hide and Leather Exchanges Association, Dried Fruit Association and Oils, Fats and Oilseeds Trade Association, as well as 14 ad hoc awards from Bulgaria, Czechoslovakia, the German Democratic Republic and the Federal Republic of Germany;

• excerpts of 40 court decisions applying the 1958 New York Convention from 10 countries – including, for the first time, cases from Belgium and Mexico – all indexed by subject matter;

• articles on the application of the 1958 New York Convention by the Italian and the United States courts; the “Additional Facility” of ICSID; and the training of arbitrators at the Institute of Arbitrators;

• a Bibliography of recent books and journals on arbitration.

The volume also reproduces the Resolutions of the Sixth International Arbitration Congress held by ICCA in Mexico City in March 1978.