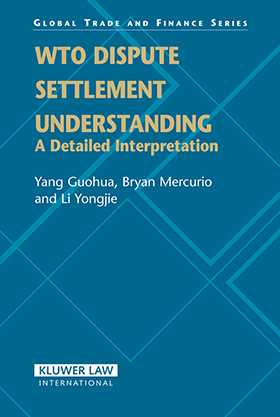 In the course of the first decade of the existence of the World Trade Organisation (WTO), the Understanding on Rules and Procedures Governing the Settlement of Disputes (DSU) has shown itself to be the foundation upon which the stable bas of the organisation rests. In essence, the DSU created a system of binding dispute settlement based on legal rules and procedures closely resembling a domestic, judicially based court system. The DSU established the procedures and rules to solve the dispute between the WTO Members and its formation has unquestionably added to the stability and positively influenced the performance of the international trading system. In short, the DSU is the procedural law within the WTO legal system.

Although a strict system of precedent is not contemplated in the DSU itself, a system of de facto precedent has emerged and every panel or appellate body carefully considers past cases in its decisions. Accordingly, a rich body of case law has developed from the jurisprudence of the Dispute Settlement Board (DSB). This major new publication is the first comprehensive exploration of this jurisprudence.

Through an article-by-article interpretation of the DSU, this book analyses how the panels and Appellate Body have read, interpreted and construed the provisions of the DSU. Its expert authors provide detailed juridical essays on each of the 27 articles of the DSU, with precise commentary on how panel and Appellate Body reports and arbitral awards (over 100 to date) affect the interpretation and application of the various DSU provisions. The coverage also includes the special or additional rules and procedures referred to in some of the agreements covered by the DSU, especially the manner in which the DSB has applied such rules to anti-dumping, subsidies and countervailing measures, and textiles. In addition, the volume reprints all of the DSU-related documents for easy reference.

WTO Dispute Settlement Understanding: A Detailed Interpretation provides complete and through evaluation of the practical working meaning of the DSU. It will be of invaluable assistance to government officials, legal practitioners, scholars, media participants, non-governmental organisations, and other in their practical and important endeavors. The detailed analysis of this very important legal material will be welcomed by all concerned with matters of world trade and globalisation.