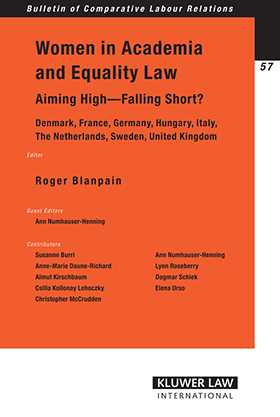 Although European policy initiatives to advance the position of women in Academia (and especially in science) have proliferated, both at national and EU levels, serious inequities of many kinds remain. This situation is exposed and investigated in this outstanding book, which presents reports and discussions from a two-day conference held at the Law Faculty of Lund University in December 2004. The participants – law professors and social scientists – present detailed reports on domestic experiences and regulations in eight European countries: Denmark, France, Germany, Hungary, Italy, the Netherlands, Sweden, and the United Kingdom.

Among the many provocative issues raised and explored are the following:

• “positive action” in theory and practice

• the motives for promoting women in Academia

With its penetrating analysis of its subject– women in Academia in Europe– and its many keen insights into the possibilities within Community equality law to move forward quickly and effectively toward equity in academic positions for women and men, Women in Academia and Equality Law will be read avidly and put to use by committed lawyers, academics, and policymakers throughout the EU countries.