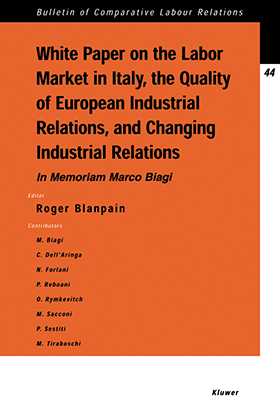 Qty.
This product is available for the standing order program. Learn More
Add to Cart
For general delivery times, please see our Shipping Policy
Share
Overview
At the time of his brutal murder in March 2002, Marco Biagi was working with Italian legislators to find ways and means of bringing innovative proposals in his field of expertise, labour and industrial relations, to productive fruition. The White Paper , to a large extent the work of Biagi himself, was commissioned by the Italian Ministry of Labour and Social Policy and first presented to the government in October 2001. The other collaborative work included in this volume, The "Europeanisation" of Industrial Relations and Changing Industrial Relations are among Professor Biagi's last writings.

At the core of these deeply committed studies lies a direct and positive response to the violent clash between the modern European heritage of social security and the unstoppable onset of globalisation. That such a response proved fatal is a potent reminder of perhaps the deepest rift in our society, a dangerously widening divide that demands the scrutiny and understanding of all lawyers, policymakers, and social scientists. This book clearly demonstrates that, for Biagi and his co-authors, such terms as "employability", "flexibility", "quality", and "security" must become measured legal terms representing social realities for employees as well as employers, and cannot be mere empty words masking "business as usual".

The importance of the White Paper cannot be overestimated, especially for Italy. Among the EU member states preparing to meet the standards of sustainable economic growth set out by the European Councils of Lisbon and Stockholm, Italy has the longest road to travel. For that very reason – and because of the seriousness of social unrest in Italy – its travails in this area can be seen as emblematic of an immense global social crisis that lurks in every country.

The second study in this volume analyses criteria for the quality of industrial relations in the EU as compared with those prevailing in the US, Japan, Russia, and the CEECs. Although each industrialised country has its own particular traditions and pressures to deal with in the world of work, this study finds evidence everywhere of intense change as well as persistent continuity. Furthermore, these commentators find that an overall European model of industrial relations cannot yet be discerned. Their recommendations, scrupulously built on existing realities, provide for a cohesive system including monitoring, incentives, interactions between different levels of policy making, new regulatory processes, and appropriate indicators, all of which will ensure an EU-wide improvement in quality of life both inside and outside work without weakening each member State's responsibility and freedom to define its own policies.

As an unflinching corrective to the sterile ideology that paralyzes progress in this vital area of social development, these two works are of great significance. They do not wave a magic wand and resolve the intractable issues with which they are concerned, but they succeed in isolating the essential elements of the problem and take a giant step toward understanding and a beginning of consensus.

The third part offers a few comments on the Report of the High-Level Group on Industrial Relations and Managing Change in the European Union.