Loading...
Store International Unjust Enrichment and the Law of Contract 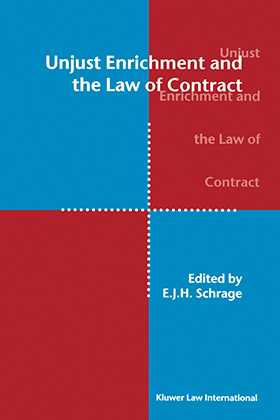 Unjust Enrichment and the Law of Contract

Qty.
Add to Cart
For general delivery times, please see our Shipping Policy
Share
Overview
Increasingly, in both common law and civil law jurisdictions, lawyers are seeking to formulate a law of restitution that can provide a reliable remedy in unjust enrichment actions. This pursuit has generated renewed interest in how the law of obligations should be divided.

The movement can be seen as both a product of the recent calls for, and recognition of, an English law of restitution and a consequence, in civil law jurisdictions (where traditionally taxonomy has been taken far more seriously), of the modern quest for a general remedy which will overcome the widely-felt disadvantages of existing alternatives.

This collection of essays is concerned with these modern developments. It identifies what constitutes unjust enrichment at the plaintiff's expense, and its available remedies, in a number of jurisdictions. Authors explore the boundaries between the law of restitution, the law of torts, and the law of contract.

Their analyses reveal how the principle of restitution has permeated, hesitatingly at first and then with greater force, on a case-by-case basis, not only private law but also administrative law, criminal law, and other branches of the law. In the final analysis, unjust enrichment proves to be anything but a Trojan horse smuggled into the well-built structure of the law of obligations; it is a fully-fledged cause of action deserving an appropriate and satisfactory remedy.

Scholars and jurists from thirteen countries met in Amsterdam on 18-20 October 2000, for a conference commemorating the late Professor Marcel Henri Bregstein (1900-1957). This book, which presents revised versions of the papers read during this conference, greatly clarifies the status and primary trends in this important area of legal theory and practice, and is sure to be of value to legal scholars and practitioners everywhere.