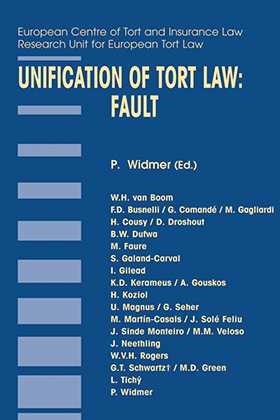 The Foundations to tort law in European legal systems differ considerably. Until recently, there has been no attempt to harmonize the entire field of tort law in a consistent and comprehensive manner. A group of tort law experts, the European group on Tort Law, is currently engaged in systematically researching the most fundamental questions underlying the various tort law systems. The result of their work is this important series of books, which is intended as a contribution to a common law of Europe.

In the present volume, the authors provide an overview of fault, traditionally considered the most important and most general prerequisite to, and the basis of, liability and its main criterion of imputation. It thus complements the two volumes on Strict Liability and Liability for Damage Caused by Others (vol. 6 and 7 of the present series), which have set forth the two other important reasons or principles by which liability is justified. The notion of fault is examined under both its philosophical and functional aspects, an approach which additionally reveals the evolution of this concept from a traditionally subjective to a modern and objectivized understanding. These divergences are reflected in the different legal systems, as demonstrated by an analysis of actual cases. Furthermore, this volume contains an appreciation of the role of fault from the perspective of the Economic Analysis of Law as well as a comparative report which attempts to describe the most important elements identified by the individual country reports and to draw some conclusions in view of the harmonisation of fault-based liability and its relation with the other bases of liability.

In summary, this volume shows the common grounds of liability based on fault in the various legal systems under examination, whilst concurrently providing the academic and the practitioner with the fundamental issues of this type of liability in the countries covered.