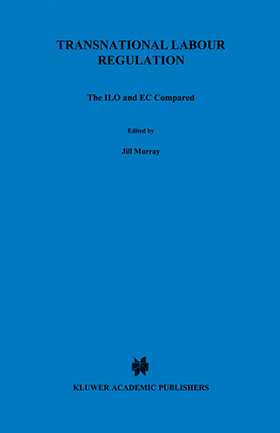 Qty.
This product is available for the standing order program. Learn More
Add to Cart
* For general delivery times, please see our Shipping Policy
Share
Overview
This book argues that the rules of the International Labour Organization (ILO) and those of the EC governing working time can be seen as examples of transnational labour regulation, and can be compared on that basis.

Contrary to certain orthodoxies about the rule-making roles of each institution, there has been a significant degree of convergence between the institutions, having regard to the nature and purpose of their rules. This convergence has arisen because of complex factors within the internal histories of each institution, and the interaction between these internal developments and the external environment in which both operate. The ILO is no longer the sole, or even the primary, setter of labour standards in the field of working time for the EU Member States, as the Community has created binding rules in many of the areas previously regulated at the international level by the ILO.

Further, any future action of the ILO may take in relation to working time is likely to be shaped by the Community, not least because the EU Member States are bound to act within the confines of Community policy to ensure the integrity of its rules. Thus, although the constitutional foundations of each institution were rather different, they now find themselves occupying much the same regulatory space in relation to this particular issue.

In these circumstances, the binding nature of certain Community rules means that EC regulation has the capacity to diminish, and some argue has already diminished, the status and authority of the ILO.