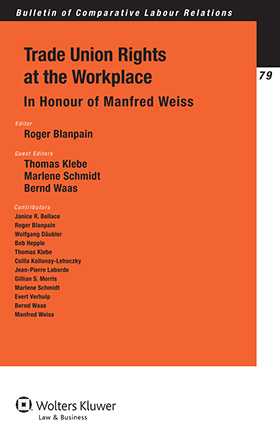 Trade Union Rights At the Workplace. In Honour of Manfred Weiss

For employees, collective protection has never been more urgent. Everywhere, pressures resulting from worldwide competition and technical innovation are downgrading and relocating jobs, closing companies, and fuelling workers’ fears of less-than-secure working conditions, de-qualification, and job loss. More and more, trade unions confront the challenge of asserting their rights across borders. However, in order to establish the necessary preconditions for any transnational solidarity, it is necessary to define and clarify both what is distinctive and what is fundamental in the different legal frameworks affecting trade union activity. That is what this book sets out to do.

The essays presented here are an outcome of an international and comparative conference, organised and sponsored by the newly established Hugo Sinzheimer Institute of Labour Law (HSI), Frankfurt am Main, which took place in Frankfurt in January 2011 at the premises of IG Metall, the world’s largest trade union. The book offers an overview of trade union rights in each of seven industrial countries: Belgium, Hungary, England, Germany, France, the Netherlands and the United States. A concluding chapter by Manfred Weiss (whose 70th birthday was honoured at the conference) notes the futility of a ‘harmonization’ approach, stressing rather a strategy of accepting variety which nevertheless embraces close cooperation. Issues covered include the following:

At a time when the protection of the global ‘voice’ of workers is of the utmost importance, sensitivity to existing cultural differences is crucial to effective international engagement and cooperation among trade unions. As an important contribution in this respect, this book will be of great value to labour and employment lawyers and other professionals involved in law and policy affecting labour and industrial relations.

Chapter 3. Trade Union Rights at the Workplace in England; B. Hepple, G. Morris.

Chapter 4. Trade Union Rights at the Workplace in the Netherlands; E. Verhulp.

Chapter 5. Trade Union Rights at the Workplace in the United States; J. Bellace.