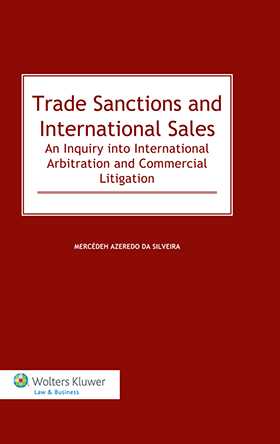 Trade sanctions are powerful political tools devised to prevent the conclusion of new commercial contracts and paralyze the performance of pre-existing ones. Following the imposition of a sanction, a party prohibited from performing its obligations under a validly concluded contract may resolve to withhold performance or performance may de facto be prevented by measures of enforcement of the sanction. If this party therefore fails to perform its obligations, its contracting partner may decide to initiate legal proceedings.

The author offers solutions to issues faced by arbitral tribunals and domestic courts when one party raises the existence of a sanction to support its claim to be freed from its contractual obligations. Critical legal issues such as the following are thoroughly investigated:

For an in-depth examination of the constraints inflicted by trade sanctions − the likely scenarios and how they play out, as well as available remedies − this analysis is without peer. It will be of immeasurable value to counsel for States and for multinationals and to other lawyers working in fields connected with international trade. Jurists and academics will also find here highly enlightening perspectives on the long-standing controversy regarding the characterization of trade sanctions in a private-law context.

PART I Sanctions and Contracts Considered.

PART II Trade Sanctions as Statutes that May Be Taken into Account for the Resolution of a Contractual Dispute.

Chapter 3 Characterization of Trade Sanctions in a Private Law Perspective.

Chapter 4 Authority of Domestic Courts and Arbitral Tribunals to Give Effect to Trade Sanctions.

Chapter 5 Circumstances in Which a Trade Sanction May Be Given Effect.

Chapter 6 Relevance of the Lex Contractus.

PART III Trade Sanction as a Ground for Exemption from Liability for Non-performance.

Chapter 8 Rights and Obligations of the Parties If the Obligor Is Exempted from Liability for Non-performance.

Chapter 9 Rights of the Obligee If the Obligor Delivers a Substitute to Avoid the Prohibition.

Chapter 10 No Exemption Possible on Grounds of Increased Onerousness.

Chapter 11 Adaptation of the Contract on Grounds of Hardship.

Chapter 12 Part III Revisited in the Light of Part IV: Remedies Available If the Cost of Avoiding a Trade Sanction Is Excessive.