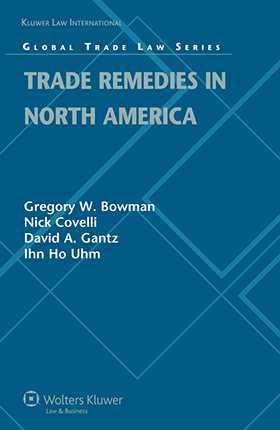 There is no question that the North American Free Trade Agreement (NAFTA) greatly enhanced trade among the United States, Canada and Mexico. Still, despite the Agreement’s title, a sizeable portion of trade between the three countries is not ‘free’ at all. Likewise, notwithstanding successive multilateral trade deals and dozens of bilateral free trade agreements concluded individually by the NAFTA countries with other countries, a great deal of trade between the NAFTA countries and non-NAFTA countries remains subject to various restrictions. These restrictions include trade remedies, i.e. antidumping duties, countervailing duties, and safeguards.

The aim of this timely book is to bring together in a single detailed work the law and practice of trade remedies in all three NAFTA countries, including the role of legal and economic analysis in trade remedy determinations, in light of the relevant international trade rules at the bilateral, NAFTA and WTO levels and their economic and political underpinnings.

‘This treatise is without doubt the most comprehensive and well written on the subject... a tour de force that sets a new high-water mark in published works on the topic. Three Cheers for Trade Remedies in North America!’ – Rajeev Sharma, Bayer Inc./York University