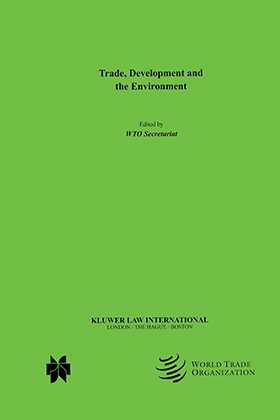 Trade, Development and the Environment

Qty.
Add to Cart
For general delivery times, please see our Shipping Policy
Share
Overview
In recent years the relationships between trade and the environment, and trade and development, have become increasingly complex. The need to reconcile the competing demands of economic growth, economic development, and environmental protection has become central to the multilateral trade agenda.

The first section of the work focuses on the relationship between trade and the environment. The issues addressed include the need for WTO members to pursue integrated trade and environmental policies in order to achieve sustainable development, ways in which the removal of trade restrictions and distortions can lead to positive environmental and development solutions, the relationship between WTO provisions and trade measures contained in environmental agreements, and the need for transparency and effective interaction between civil society and the trade community.

The second section examines the growing importance of developing countries in the global trading system over the last 30 years, and the ways in which the inequalities which persist between countries may be addressed. The papers include discussion of the need for integration of the least-developed countries into the multilateral trading system, the ways in which international institutions may work together to realize the objective of development, the complex role of trade liberalization in development, and the importance of new technologies in accelerating integration between developing and developed countries.