Loading...
Store International Towards WTO Competition Rules, Key Issues and Comments on the WTO Report (1998) on Trade and Competition 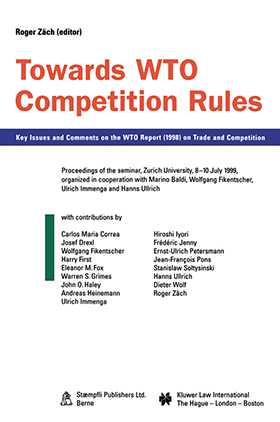 Towards WTO Competition Rules, Key Issues and Comments on the WTO Report (1998) on Trade and Competition

Qty.
Add to Cart
For general delivery times, please see our Shipping Policy
Share
Overview
The progressive elimination of formal, government-imposed trade barriers under the General Agreement on Tariffs and Trade (GATT) and--since 1955--the World Trade Organization (WTO) brought competition policy onto the agenda of the WTO. In November 1998, a WTO working group presented a comprehensive report on the `Interaction between Trade and Competition Policy' (the Jenny Report).

In July 1999, a group of internationally recognized competition law experts, together with high-ranking officials from the WTO, Geneva, the European Commission, and the German Bundeskartelamt met in a seminar at Zurich University with the aim of commenting on the Jenny Report, of identifying key issues for international competition rules and of presenting proposals for such rules. The results are presented in this volume.

Due to evident differences between the US and Europe/Japan in the goals and features of rules protecting international competition, negotiations in this area will be difficult. The contributions contained in this volume offer new approaches and proposals that might help to overcome these difficulties.