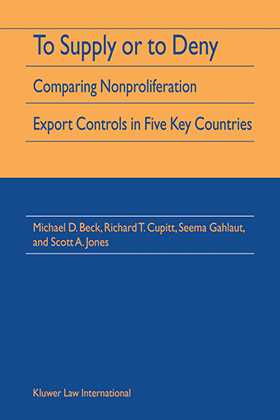 To Supply Or To Deny: Comparing Nonproliferation Export Controls in Five Key Countries

Qty.
Add to Cart
For general delivery times, please see our Shipping Policy
Share
Overview
Weapons of mass destruction (WMD) are not necessarily acquired as entire systems. They are often assembled from parts and materials, many of which are dual-use¿i.e., of both commercial and military utility. Often, suppliers of these components do not ask who their customers are or inquire about the intended application. This has for a long time been the Achilles¿ heel of well-intentioned nonproliferation conventions.

In this eye-opening collection of essays, sponsored by the Center for International Trade and Security at the University of Georgia (USA), a group of outstanding experts in the nonproliferation field report on the efforts of five leading supplier countries¿the United States, France, Russia, China, and India¿to implement export controls on weapons and sensitive technologies used for producing WMD.

The book is both reassuring and alarming in its very precise survey and analysis of export control regimes. At most national levels, regulation is rapidly making firms more accountable, and more industries are routinely implementing internal compliance programs. However, these advances are in a neck-to-neck race with intangible methods of transferring information, corporations with no national allegiance, and competition among international suppliers.

Based on in-depth research¿each of the contributors spent considerable time conducting interviews with government officials and other policy experts, observing policy making and implementation, and gathering empirical data¿this detailed and thought-provoking book will be of great value to all concerned with security objectives for the twenty-first century.