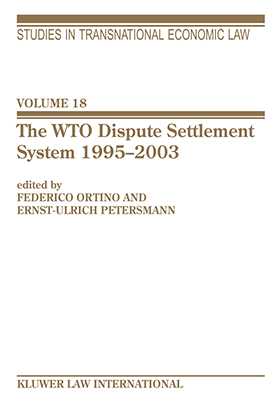 Qty.
This product is available for the standing order program. Learn More
Add to Cart
For general delivery times, please see our Shipping Policy
Share
Overview
In its ten years of existence, the World Trade Organization (WTO) dispute settlement system has continued to differentiate itself in many ways from more conventional international judicial proceedings such as those before the International Court of Justice (ICJ) or regional integration courts. The regular participation of third parties, the emphasis at all levels of the ¿ordinary meaning¿ of the text of WTO rules, and the raft of proposed amendments to the Dispute Settlement Understanding (DSU) all characterise WTO jurisprudence.

In twenty-six incisive contributions, this book covers both the ¿legislative¿ and ¿(quasi) judicial¿ activities encompassed by the WTO dispute settlement system. Essays concerned with rules emphasise proposed improvements and clarifications in such areas as special and differential treatment of less-developed countries, surveillance of implementation, compensation, and suspension of concessions. Other contributions discuss such jurisprudential and practical issues as discrimination, trade-related environmental measures, subsidies and countervailing measures, and trade-related intellectual property rights. The authors refer frequently to the panel, Appellate Body and arbitration reports, a chronological list of which appears as an annex.

The contributors include WTO arbitrators, members of the WTO Appellate Body, WTO panelists, and academics from a broad spectrum of countries engaged as legal advisers by the WTO, by governments, or by non-governmental organisations. More than a mere snapshot of the current status of the WTO dispute settlement system, this outstanding work represents a comprehensive analysis that brings a fast-moving and crucially significant body of international law into sharp focus.