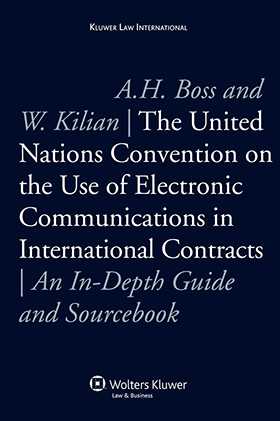 The use of electronic commerce in international trade is growing by leaps and bounds. No one can dispute the need for a system of rules to guide countries as well as private commercial parties through the many new developments and issues that arise. The United Nations Convention on the Use of Electronic Communications in International Contracts (ECC), adopted by the United Nations General Assembly in December 2005 and currently undergoing the ratification process, provides such a system. This book is a guide and resource on the Convention: its evolution, interpretation, and relationship to domestic laws throughout the world.

The book represents the outcome of a conference held at the Leibniz University of Hannover in September 2007. It consists of an introduction to the drafting of the Convention, expert commentary on each article, and perspectives in the context of domestic and substantive law. A distinguished panel of authorities- representatives of governments, international organizations, transnational companies, and universities, as well as practising attorneys, all of whom have been active domestically and internationally in confronting the legal issues of electronic commerce- discuss such aspects of the ECC as the following:

Several authors provide in-depth analysis of the interaction between ECC provisions and other relevant legal regimes (including the United States, ASEAN, the EU, Sri Lanka, India, and China), as well as the interrelations between the ECC and ICC rules, rules under the CISG, and the trade usages of the lex mercatoria.

The various contributors highlight issues arising from each ECC provision, and provide well-informed insight into how remaining problems are likely to be resolved as the Convention enters into force. Stakeholders from all concerned sectors of the legal community - businesspersons and their counsel, IGO and government officials, and academics - will benefit greatly from the detailed information, analysis, and guidance offered here.