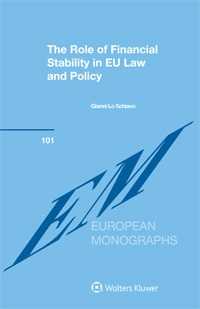 The Role of Financial Stability in EU Law and Policy

The Role of Financial Stability in EU Law and Policy offers a comprehensive examination of the concept and normative underpinnings of financial stability, with a specific focus on the European Economic and Monetary Union (EMU) and the European Banking Union (EBU). Since the outbreak of the financial crisis in 2008, EU institutions and Member States have engaged in a major effort to repair the architecture of the EMU. According to the author, financial stability has become a foundational objective which is based on a set of new supranational normative instruments in EU law and policy. Arguing that financial stability is a foundational objective in EU law and policy, this ground-breaking book provides an in-depth understanding of the newly developed framework to attain supranational financial stability.

This study, in its analysis of the legal implications of these new instruments, examines topics and issues such as:

As an exhaustive, thorough and interdisciplinary analysis, this book helps to understand the nature and role of financial stability in the context of the European financial crisis. As an assessment of the complex new rules that govern the EMU and EBU, this book enables readers to comprehend the legal reasoning and normative analysis behind the most recent waves of financial reforms in Europe. Thereby, the book appeals to officials in EU institutions and agencies as well as lawyers and academics in EU law and in banking/financial law to gain a clear insight into the normative instruments intended to attain supranational financial stability in EU law and policy.