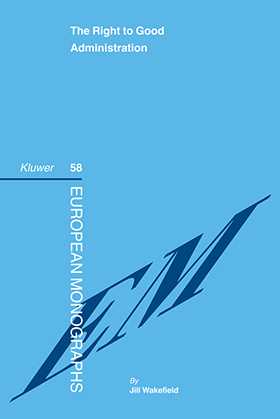 The Right To Good Administration


Among the rights conferred on the citizens of Europe by the Charter of Fundamental Rights and Freedoms is the right to ‘good administration.’ It is anticipated that the new Reform Constitutional Treaty will operate to make the Charter and its rights legally binding. This is the first time that any legal system has proclaimed such a right and then sought to constitutionalise it. Whether the right to good administration under the Charter represents a new right, and, if such a right exists, whether it varies according to whether the executive is mandated to control or steward, is the subject matter of this thoughtful, unblinkered book.

Grounding her exposition in a deeply-informed engagement with relevant primary and secondary sources, the author exposes the serious difficulties and contradictions in the concept of the right to good administration. She demonstrates that the features of good administration cannot be fixed or fully enunciated, but are identified only when the conduct of the administration fails to reach an acceptable standard, a standard that varies over time and context. And in the modes of the concept most often embraced—such as the notion of citizen as consumer with marketplace choice, and the notion of ‘consultation,’ a form of participatory democracy which privileges those individuals and communities who have the political sophistication to organise themselves and further marginalise large sectors of unorganised society—she finds a virtual denial of the democratic concept of citizen as sovereign, the ‘creator’ of state power who can dictate the exact limits to be placed on personal autonomy.

The extraordinary clarity and conviction of the author’s approach is apparent in the details of her presentation, which include analysis of the following factors among others:


• the enforceable content of the right, including the role of the European Ombudsman;

• the relationship between good governance and good administration;

• the duties of the Commission as administrator;

• the uncertain reach of the concept of maladministration;

• damages in compensation actions as remedy for breach of good administration;

• pre-Charter principles of good administration as agreed in the Council of Europe and developed by the Courts; and


The final chapters examine the role of the right to good administration in the fraught contexts of competition law, Community finances, and the European environmental framework.

This far-seeing study breaks new ground in the ever more politicized debate over the future of the European Union. As good administration is the mechanism by which the principles of good governance are to be delivered, the detailed attention given to this subject here is more than warranted. It is sure to be of exceptional value to all concerned with the development of an administrative institution of integrity and accountability in EU governance.

2. The Nature of the Right to Good Administration.

3. Codes of Practice: Constraining the Exercise of Authority.

4. The Right to Good Administration under the Charter of Fundamental Rights.

5. Good Administration and the Ombudsman.

6. Judicial Review of the Breach of Good Administration.

7. Damages for Breach of Good Administration.

8. Good Administration in the Competition Area.