Loading...
Store International The Protection of Well-Known Marks in Asia 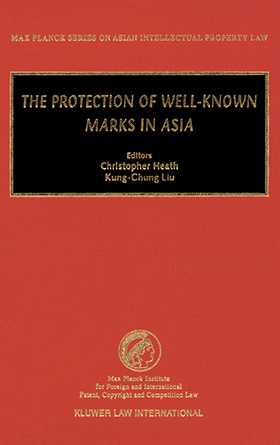 The Protection of Well-Known Marks in Asia

Qty.
This product is available for the standing order program. Learn More
Add to Cart
* For general delivery times, please see our Shipping Policy
Share
Overview
Trade mark law has become an increasingly important field of law in the context of a rapidly globalizing economy. The promotion and protection of marks is widely viewed as the most important tool for a successful expansion of business, particularly in areas of economic transformation such as the Asia-Pacific region. The importance of the Asian market for global competition makes the appearance of a book on the protection of well-known marks in Asia extremely timely.

This collection of expert essays examines the legal protection of well-known marks both under trade mark and unfair competition law in 10 different jurisdictions of the Asia-Pacific region, analysing the still widespread piracy of well-known marks in the context of the underlying legal and cultural concepts.

It explores the significance of trade marks in an information society, highlighting the tensions between those seeking to protect their well-established brands globally in an age of electronic commerce, and those concerned to prevent large firms from being granted indiscriminate control over certain marks without having made the corresponding marketing efforts. It examines the opportunities and problems arising from the advent of the new digital technology, and looks at some of the issues the technology gives rise to, such as the protection of domain names.

The papers collected in this volume are the revised and updated proceedings of a conference on Trade Marks, Domain Names and Unfair Competition in the Information Age, held in Taipei in January 1999, as the result of the co-operation by the Sun Yat-Sen Institute for Social Sciences and Philosophy, Academia Sinica, Taipei, and the Max Planck Institute, Munich.