Loading...
Store International The Politics of European Sales Law: A Legal-Political Inquiry into the Drafting of the Uniform Commercial Code 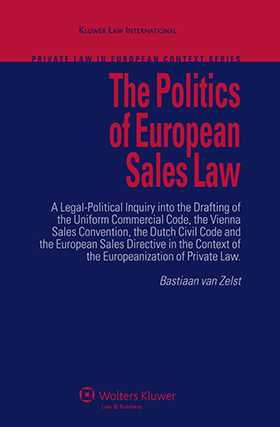 The Politics of European Sales Law: A Legal-Political Inquiry into the Drafting of the Uniform Commercial Code


We like to think that sales law is technical. The presumption that it is possible to draft a Civil Code without making ideological choices - and that codification can be regarded as essentially technical - would appear to be the leading view. This book investigates the political stakes involved in the drafting of private law, more particularly in the drafting a European contract law. As is demonstrated by this original and powerful book, the drafting of private law - sales law in particular - cannot be considered apolitical or value-free.

The author focuses on the politics involved in the development of a European contract law. He investigates the choices made in the European project, based on a comparative, political and historical analysis of the process. The book assesses in detail the outcomes of, and experiences in, four other legislative processes in the area of sales law those preceding the adoption of the American Uniform Commercial Code (UCC), the Vienna Sales Convention (CISG), the Dutch Civil Code (BW) and the Directive on Consumer Sales and Associated Guarantees (European Consumer Sales Directive).

Many crucially important issues rise to the surface of debate in the process of this analysis, including the following:

• the roles of scholars, interest groups, and constituency factors in legislative processes;

• the conception of technicality of legal doctrine; • the use of policy argument based on the premise of its neutrality;

• movements or rule alternatives along continuums of altruism/ individualism and buyer/seller interests.

• the development of the provisions on scope, the possibility to derogate, distribution of liability and remedies during the legislative processes of five instruments of sales law; and

Rather than having a reformist agenda, the author’s intent is to contribute to the understanding of the political stakes in legislative processes, and in the area of sales law in particular. In offering those involved in the ‘Europeanisation’ of private law an alternative view to the received understanding, this book provides ample evidence that the development of sales law is politics and argues that the organisation of the drafting process of European private law may lead to results inconsistent with the project’s ambitions.