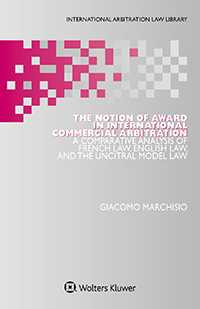 The Notion of Award in International Commercial Arbitration

The Notion of Award in International Commercial Arbitration. A Comparative Analysis of French Law, English Law, and the UNCITRAL Model Law aims to provide a comprehensive explanation of the notion of arbitral award in international commercial arbitration. International commercial arbitration relies extensively on the possibility of enforcing arbitral decisions against recalcitrant parties. As courts and arbitration laws across the world take contrasting approaches to the definition of awards, such enforcement can be problematic, especially in the context of awards by consent and the recent development known as ‘emergency arbitration’. In this timely and groundbreaking book, a young arbitration scholar takes us through the difficulties of defining the notion of arbitral award with a rare combination of theoretical awareness and attention to the procedural requirements of arbitral practice.

What’s in this book:
In a framework using a comparative analysis of common law and civil law jurisdictions (specifically, England and France) and how each has regulated in different ways the equilibria between state justice and arbitral justice, – and comparing each with the UNCITRAL Model Law – this book addresses such issues as the following:

•    the ‘judicialization’ of arbitration;
•    different models of arbitral adjudication and their impact on the notion of award;
•    what an award needs to contain to be enforceable;
•    awards on competence;
•    awards by consent; and
•    awards ante causam.

The author employs a methodology that views arbitration as providing an institution for administering justice rather than as a purely contractual creature. To this end, rules of arbitral institutions (particularly the ICC) are examined closely for their implications on what an award means.

How this will help you:
Having a fresh look at the arbitral award by placing it in a broader context than is usually found, this book allows for a greater understanding of the functioning and evolution of contemporary international commercial arbitration. This book clarifies the status of controversial decisions, such as jurisdictional decisions, consent awards, and emergency orders. As an assessment to help readers determine which arbitral decisions should be qualified as awards, this book is sure to become an international reference for arbitrators, practitioners at global law firms, companies doing transnational business, interested academics, and international arbitration centres in emerging markets.

CHAPTER 8 Conclusion: The Need for a Non-unitary Notion of Award